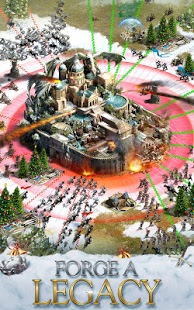 Clash of Kings: Last Empire is a free-to-play mobile strategy MMO game available on both iOS and Android platforms. The game is developed by ELEX Wireless, a Chinese-based company.

Players will start the game as the commander of an army in the middle of a siege, using the military to take down a castle wall, capture it and claim it as their own base of command.

After that, players will go through a tutorial that will teach them how to build buildings, upgrade buildings, head into battle, train units, collect resources, and do some research to improve their knowledge.

Clash of Kings Last Empire features gameplay that’s very similar to the famous Game of War, having the ability to equip a set of gear and head into battle. Another element is its robust Alliance system that lets players fight together and faces massive team objectives for legendary rewards. The game also has no relation to Clash of Clans despite having a similar title.

• Create an Empire – Players can build their city in real-time under the threat of an enemy invasion during night and day.

• Research Trees – Create a college and select from the four research trees to focus on. Players can choose from the City Development, City Defense, Resources, and Military branches.

• Gearing Up a Hero – Equip heroes with a full set of gears and lead them to battle.

• PvP System – Players can scout and attack their neighbors and join in events to gain great rewards and rank up on the game’s leaderboards.

• Join an Alliance – Players can apply to join a guild of players that can help them with the construction time, fighting other alliances, and capturing other player’s bases.

Why is everyone saying this game is boring it gives me something every min or 2 I get speed ups it gives me food and wood so why is saying don't download it and its boring why why just why are people saying that? It's not the worst game ever its fine to me

Best kings game...but
The new version is not working good the mail box is like an old version..and the music changes automatically by itself......solve it

Unable to retrieve facebook bind account
I am unable to retrieve facebook bind account and when i switch from google account to facebook account it does not connect and load the game. This has been for weeks and is frustrating I am unable to play my main account. Before the update i can still talk to the game personel. After the update it is all auto reply. Can you please advise how to solve this?

I quit again
They just not doing the updates that i was hoping for. The sage building is a joke, the hero is a joke. Still no defense added to armor and the application is over 80 MB to download. Just to big and takes up to much space. Im tired of elex games..

I can't login
After the last server maintenance I have not been able to log in to the game. I have a good internet connection. I have enough storage space. The problem is from the game. And support team doesn't give me replies. I have reinstalled the game twice and still not working. I wont be replied here too. This is really frustrating. I can't bear it. I also paid on my castle. It's unfair.