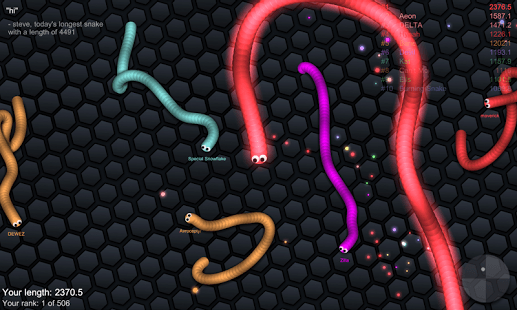 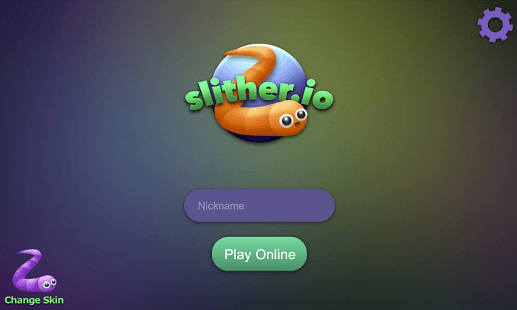 Slither.io is a free-to-play online game where players will have to control a big worm that is trying to eat all the colored balls that crosses your path. It will not be an easy task to eat as many balls as possible, that because you will end up against other worms that compete to eat as many colored balls as they can.

This game is a strategic and highly entertaining online game that features slithering snakes. In addition, it features 12 skins for players to choose to decorate their snake with and gives them a little edge when getting a little longer.

Slither.io’s gameplay and concept are identical to Agar.io and other similar titles. However, there is one significant difference. In this game, players will get a chance to defeat any foe, regardless what their size. All they have to do is to get the other worm to butt heads with their worm’s body. But be careful not to bump the head on other snakes, or the game is over.

Every time a worm is defeated, the remaining worms will get to it them in order to become bigger. That is why a careful strategy is crucial like following other bigger worms while waiting for other worms to defeat them and will allow the player’s worm to eat it and get bigger.

Slither.io comes with a very funny concept with a few technical issues. The game is also absolutely silent, and it doesn’t have any soundtrack.

Original IO Game
This is awesome with bots but the online option is REALLY Laggy my WiFi is perfect Fix that but awesome game And Also on AI mode there's no big snakes add some 20,000 in there it is gonna be alot more fun Great Game Tho! Kewl Skins BTW thanks for adding lots more :D Thx for this Lowtech . Miniclip wouldnt make a slitherio app for mobile. Miniclip only cares about their money!

SO COOL AND AWESOME
Hey I know you are on our rental car insurance n. Hey I have my kids and neighbors kids still coming back in. Lol no I don't get some stuff done for you? If I can help in a minute or whatever you know. Hey how easy with u something? And do u know me to go home for sure lol im just got done everything in the middle both stay overnight delivery to be an

OH YEAH ! .. Video Game Cocaine
Simple to play. Beautiful to the eye. Smooth &amp; graceful.. Ahhh ! .. But such beauty may be all too short lived. The masters of the game are out there, waiting to flip, turn, and roll you into their pile of tasty energy nuggets, in the eternal battle for worm world domination.. So, sunshine; Are you champion.. or chum.. ? [FROST]

Servers are so bad
Fix the lag and it would be a 5 star game. So sick of losing a larger life due to am unavoidable but forseeable collision because the lag jumps the other person right in front of me after a forced pause.. my internet is not the issue it's the 100/30 speed

Meh
Decided to give this game a 2nd chance on my new (Samsung) phone using my 75mb connection which I am able to play 4 WoW accounts on at the same time with no lag. And yet here I do get lag (despite being perfectly fine on gfs iphone). A very creative and addicting game. It's just unfortunate the developer hired amateur software engineers who seem unable to fix cross platform. Contact me if you want somebody better. The students in my old computer basics class did something similar and surprise! No such issue

Their attempted lag fix made it worse.
Used to have extremely iritating lag. Now its not so laggy but 75% of the people online aren't real people. They are obviously A.I. They need to have one or the other. I hate playing what is supposed to be other players and losing to what is an obvious computer. If I wanted to lose to a computer I would play A.I. mode.