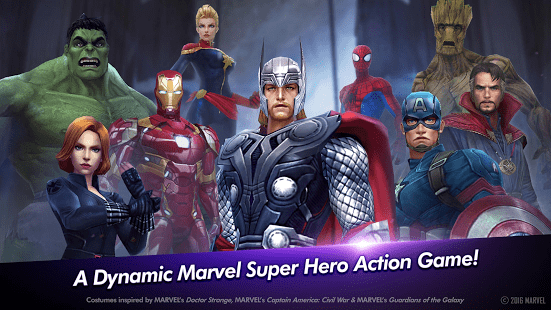 You can choose from an array of Marvel superheroes and villains to join in the battle against multi-dimensional enemies, that includes the movie’s primary antagonist, Ultron. The game’s combat harkens to brawler-style gameplay, where you can progress through a linear level, defeating enemies as they go, and reaching the final boss where your fighting abilities will be put to the test.

Marvel Future Fight also features a hefty amount of RPG-inspired character customization where you can boost specific skills, level up your characters for higher stats, and upgrade their armor. One unique feature of the game is the party bonuses that are available to all players that will give them stat boosts for specific team compositions, encouraging you to unlock and explore more players to play with.

You can unlock and utilize over thirty Marvel superheroes and villains, and arrange them in teams of three to defeat enemies, brawler-style, in different recognizable levels.

Character Customization – this feature will allow you to make your favorite characters strong through character skills, equipment, ranks, and cosmetic skins.

Marvel Universe – you can choose to over thirty playable Marvel character that ranges from popular to more obscure.

Auto-Play Mode – you can turn on the auto-play mode to activate the game’s AI that will allow you to grind areas that you’ve already finished.

Sleek Visuals – this is the crisp and detailed 3D graphics for mobile platforms.

Acton-Packed Brawler Combat – you can defeat enemies with the help of your party and by switching characters at will.

3v3 PvP – you can defeat other players in a three character arena match that will give you great rewards for climbing the ranks.

Going into battle with the right team is always the best way to get battle bonuses. Once you are inside on the My Team screen, you can simply tap on the Team Bonus button and have a look at different team setups that will give you the said bonuses.

You will also have an easier time to decide which hero you will put together since that menu will give you the list teams of characters that you already have on your roster. Teams like Black Widow, Iron Man, and Hawkeye or Falcon, War Machine, and Winter Soldier are the kind of team that you will need to get team bonus stats.

Marvel Future Fight is obviously a pretty good mobile beat’em up game. You will be facing a number of henchman and a lot of familiar bosses along with a select group of three team members. Each of your playable characters is split into Speed, Combat, Blast, and Universal. Your combat characters are up close and personal fighters, speed fighters dish out damage with their super-fast strikes, blast types get in damage with ranged attacks, and universal characters are balanced in all areas.

When you play, here’s an easy way on how you should proceed when you are in battle. First, tear down all those mobs of enemies using only basic attacks. Once things start to get tough for one of your characters, it’s time to use all of their special skills, and then right away switch your character out for your next chosen character.

Don’t also forget to switch out your characters after every mission. You can leave them behind from time to time for them to reach the best condition status. Once your character will reach that condition and comes back into action, they can finish missions and receive bonus EXP and gold.

Do Elite Mission To Get Awesome Rewards

After you complete the normal mode version of a mission, you can try the same mission again, but this time it will be in elite mode. In an Elite mode, you will face tougher enemies, so you need to make sure your heroes can handle them. The rewards will be great. If you’re looking to get biometrics for your characters, you can usually find them in the elite mode versions of the mission.

You can receive bonuses daily if you log into the game everyday. There will also be multiple bonuses for logging in daily, and sometimes you can even score a free hero by logging in several days consecutively. If you have no time to do a mission, just try to open the app and collect your log-in reward. You can even grab a free dimension chest every 24 hours, so don’t forget to get this as well. And if possible, try opening it as soon as you can since it’s on a 24-hour timer and not a regular daily reset. The chest can give you ISO-8, biometrics, and even free heroes.

Where To Find Biometric Location

Biometrics can also be used for ranking up your recruited heroes. You can collect their biometrics and rank them up to improve their overall stats. You will also be able to unlock additional skills if your hero reaches a specific rank.

You can locate your hero’s biometrics by going to Home – Inventory- Biometrics tab. Tap on the hero’s profile with a number on it. You will see two buttons on the item info section that says: Sell and Location.

Simply tap on the second button for you to find out the elite missions that you need to complete to get your hero’s biometrics.

Choose Which Control Is Better: Control Pad or One-Touch

You need to choose the type of control that will fit your play style. If you choose One-Touch, you will be tapping on the screen to move and attack. But with the control pad, you can use your left and right thumb to move and attack your opponents.

You should not forget that you should always upgrade your hero’s gears since the materials for ranking up gear can easily be acquired by just completing normal missions. You can play a normal mission several times since they are easier to complete than elite missions.

But don’t forget to also play an elite mission for you to receive greater rewards. The best technique is to play and replay normal missions, finish all of them to gather gear materials, and upgrade your heroes to make them more powerful and then play Elite missions.

You can go to My Team, choose a hero from the list located at the bottom of the screen and tap on Gear. Whatever hero you choose, you will have at least four items to upgrade, and every upgrade will increase your hero’s physical defense, physical attack, attack speed/critical hit, HP, skill cooldown, etc.

Keep in mind that your hero needs to reach the required level before you can upgrade his/her gear. You can freely choose the gear that you wish to upgrade, but it would be better to upgrade the first two gear items – Body Suit and Basic Attack. Upgrading those two will ensure more damage to enemies while you hero will only take less damage when attacked.

All heroes have a distinctive skill that can do massive damage to your enemies. The area of effect damage is very useful if you are surrounded by many enemies. Make sure to always upgrade your skills after each level or mission.

You can upgrade your hero’s skill by tapping your hero’s profile located on the bottom of the My Team page and tap on Skills. Next, tap on the plus symbol for you to find out how many coins are required for a skill level-up. Upgrade each hero’s unlocked skills and don’t just focus on one skill.

Great game, typically 4 stars, but 5 this time
Overall, good game play/graphics, and TONS of content and options. There is a good balance between free to play and pay to play. The absolute best characters are available to anyone, but be prepared to grind to rank up/level up. They do have free events and daily login rewards to speed your progress. Kicking in even $3.50 a month speeds things along. The latest update actually reflects Marvel / movie history reasonably well... that's where the 5th star came from.

Highly Addictive
I usually go through phone games like fat chick's go through ice cream but I have been stuck playing this game for 6 or 7 months now and don't plan on quitting. There is always constant updates with new characters and story's lines it's awesome. . Great job NM and great job marvel as usual

Great Game
This game is amazing, the only mobile game I have consistently played for over a year. You're always seeing new content, and while you do get fun events they don't ignore working on the core game to focus just on event after event. This game actually makes me want to spend money on it, but you don't have to, they have daily ways of earning the special currency. (Without having to watch ads or download other games.)

world boss still too hard and
nice setup for a game,but this game will keep you perpetually weak like just start game. Your hope of amassing great power even advancement. So you can dominate some part of the game is void. After spending a lot of money to get power ups at next update I will delete. Shame I really wanted to like this game too. As the game grew too big for me to have other games on the phone.

From worse to the worst
A rip off. You got to spend your money if you ever want yo hv strong heroes. Extremely slow progress if you dont spend money. Game just got a lot harder to win with the worthless heroes. 90% failure rate on the latest missions. Not worth my time!!!

FTP or PTP?
Previously I gave it 5*. Now 1* because there is no option of 0*. It's was a great game. But now it's becoming a pay well game. They starting to sell characters. It's a shame net marble. I wish marvel cancel your license for being soo greedy. U don't deserve to be a part of marvel family. U are selling crystals and other stuff but that's not enough for u. Tell me how a FTP player can get those characters? If a FTP player can't get them with out spending money then how it become a free game?