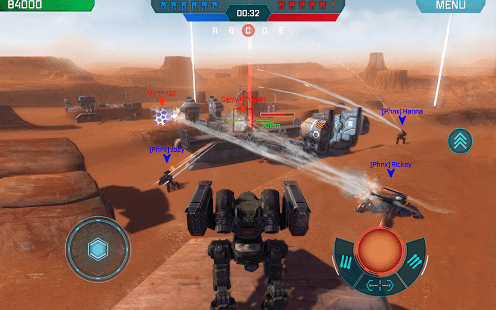 Previously known as the Walking War Robots, the War Robots is now one of the top action games that can be downloaded and played on any gadgets. It is a free mobile game application that developed and published by Pixonic, which is a Russian game developer. This game was first released back in 2014 available on iOS, and in the following year, it was made available on Android users.

The game comes with a multiplayer system in real-time. Players will be the one to control or operate a giant robot on a live battlefield which they will have the option to team up with other players or play the game solo. War Robots’ battles are usually held up to 6 on 6 mode.

When entering into a battle, some might notice that some players are missing, these players are automatically added to teams and sorted out by the game’s system of matchmaking. As the battle is about to start, the other team are spawned on the other side of the game’s map, and the player only has 15 seconds of time to choose a robot to use before the 10-minute battle begins.

The main objective of the game is to hold or capture beacons where there are five and can be located on the map’s key locations. To win every battle, the players can deplete or lose the opponent’s bar to zero by capturing more of the beacons, maintain a longer bar than the enemy until the 10-minute time is up, and by crushing all the enemy’s team robots before the time runs out. Fight all the way up to glory, and lead the clan to victory.

Best game yet.
This is one game that isn't money minded. I can make the game easy or difficult. Just gotta set up the right bots. This is fairly fast paced, easy to get gold and work shop points. You can p!at as much as u like. Game doesn't get harder as u level upforcing u to get bigger bots. One game mode makes it simple so there is very little to no lag most of the time. Game has never been down for maintenance. Used to play iron Force alot, this game makes that game look like it's from the 80s

Except for that last pumpkin special, total rip off and I bet no one received any prizes of real worth.
Great graphics, smooth gameplay, will evaluate and modify rating soon. Update, I endorse this game. Takes a short time to learn some technique but very enjoyable. UPDATE, still enjoying this game!! Definitely a top choice of games. Keep up the great work. Still loving this game!

Battle Time
The game is a lot of fun and awesome, but I have a problem with the time it takes to win a battle. When you start a battle you are part of a team of other players and your goal is to obtain more beacons than the red team and you have a 10 minute time period to complete your objective. There have been times where the other team claims 4 beacons in 4 minutes and the game ends. We still have 6 minutes on the clock to claim those beacons back. Whats the point of 10 minutes to battle when you can lose in 4min?